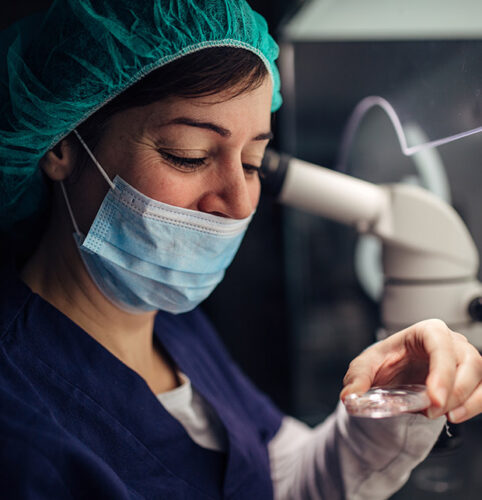 All about egg quality

You’ve likely heard the phrase, “the fastest sperm wins the race.” The reality is not nearly as straightforward as that, and the egg—despite the lack of witty phrase for it—is by no means a passive participant in reproduction – just there waiting for the winning sperm. Too often, the importance of the egg is understated.

Did you know that once the sperm has fertilized the egg, most of it disintegrates? The sperm’s main job is to carry genetic material. Nearly everything else the eventual embryo will need is contained within the egg, and the egg prepares for this throughout its own maturation. The egg builds up a storage of mRNA (the instructions for building proteins) to direct the development of the eventual early embryo. Once it’s been fertilized, the egg is known as the zygote, which begins to divide to form the embryo—in this sense, the egg essentially becomes the embryo. Its cell membrane and its cell contents become the embryo’s. Even the protective coating around the egg (the zona pellucida) remains until day five of embryo development. The fate of the embryo is therefore highly dependent on the quality of its precursor egg.

Aging is the biggest factor that affects egg quality. That’s why women over 35 have a harder time conceiving without medical assistance and when they use their own eggs for IVF. With donor eggs, however, they are much more likely to become pregnant, which shows that aging doesn’t negatively impact the womb so much as it does the egg. Meanwhile, other conditions, such as obesity and polycystic ovarian syndrome, appear to affect both the egg and the womb, making the use of donor eggs less effective.

Why does fertility decline with age?

To visualize how female fertility changes with age, picture an upside down U-shaped curve.1  The shape of this curve is likely due to incidence of errors in the chromosomes (which contain genetic material) of the egg, known as aneuploidy. Aneuploidy is the most cited explanation for age-related infertility, as it’s the main reason for first trimester pregnancy loss. As women age, the number of eggs in their ovaries declines and so does the quality of those eggs. Although “egg quality” is poorly defined (there’s limited information on what makes an egg high- or low-quality), higher rates of egg aneuploidy with increasing age have been well documented. We can look to the fertility curve to help inform reproductive decisions. Contrary to popular belief, the eggs of very young women are not the highest quality, as they also display high rates of aneuploidy. Eggs become more “normal” around age 23, which is where the most fertile years of a woman’s life begins. The rate of “normal” eggs peaks at around age 28, indicating peak fertility. Only at around age 35 does fertility begin to sharply decline, and by 45, fertility is very low.

What information is available to me about the quality of my eggs?

Unfortunately, very little information is available about egg quality. There are ways to determine egg quantity, such as an antral follicle count (where your doctor counts the number of follicles in your ovaries via ultrasound) or AMH testing (where the level of the hormone AMH is measured, as it correlates to egg count). These tests are important in assessing female fertility because eggs are a finite resource—unlike sperm, which are continuously produced. But egg quantity is not the same as egg quality.

Egg quality is difficult to assess non-invasively because so much about the egg is still a mystery. Currently, physicians make judgments about egg quality based on a patient’s age group, but this doesn’t account for the variability between patients in the same age group, especially among younger patients. The quality of a woman’s eggs might also vary between cycles.

Future Fertility is tackling this problem through artificial intelligence products for egg assessment, called VIOLET™ and MAGENTA™, which make predictions about the likelihood of an egg becoming an embryo. These products were built with a dataset of tens of thousands of egg images recorded by embryologists to identify attributes within the image that are correlated to egg quality and successful outcomes. Our personalized reports give you pictures of your eggs, predictions for each egg, and a personalized assessment of your chances of having a baby based on the quality of your eggs (as perceived by the AI system).

VIOLET™ reports are tailored to egg freezing patients while MAGENTA™ reports are for IVF patients. Future Fertility’s tools will give you information that is otherwise unavailable, which can empower you on your fertility journey.